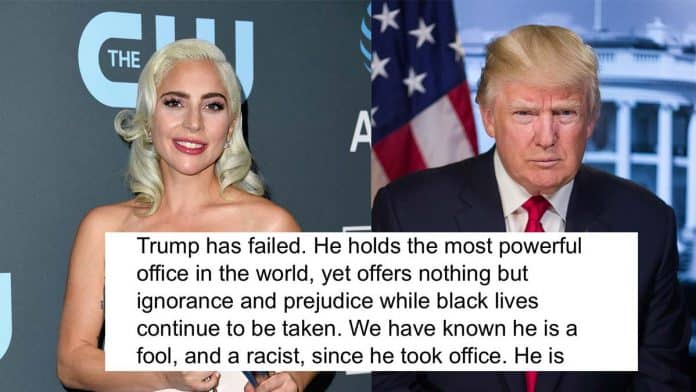 Lady Gaga, on May 31, 2020, decided to step forward in the support of George Floyd who was deliberately killed by a Minneapolis police officer and to voice her opinion on racism, white privilege, and the President of the United States.

Gaga began by demonstrating the sufferings of Black Community, oppression against them, and her outrage over the unfair killing of George Floyd:

“I am as outraged by the death of George Floyd as I have been by the deaths of exponentially too many black lives over hundreds of years that have been taken from us in this country as a result of systemic racism and the corrupt systems that support it.

The voices of the black community have been silenced for too long and that silence has proven deadly time and time again.“

She encouraged her followers to stand in the support of the Black community and wrote, “Right now is a critical time for the black community to be supported by all other communities so we can put a stop to something that is intrinsically wrong by the grace of God or whatever creator you do or do not believe in.“

After that, Gaga calls out President Trump accusing him of racism and deeming his administration nothing but failure, “We have known for a long time that President Trump has failed. He holds the most powerful office in the world, yet offers nothing but ignorance and prejudice while black lives continue to be taken.

We have known he is a fool, and a racist, since he took office. He is fueling a system that is already rooted in racism, and racist activity, and we can all see what is happening.“

“It’s time for a change,” She writes.

Lastly, she advised people to show respect, compassion, and care for each other and being a privileged woman, promised to stand in the support of those who are less so:

“I urge people to speak gently to each other, speak with passion, inspiration, and impress the importance of this issue until the systems that keep us sick die, instead of people we love.

We must show our love for the black community. As a white, privileged woman, I take an oath to stand by that.“

Fans and friends appreciated Gaga for her action of standing against injustice and broadcasting the bold message across the audience, whereas many of them countered what she wrote about Trump and held him unaccountable for the trouble, resulting from violent protests, that is clouding the country.