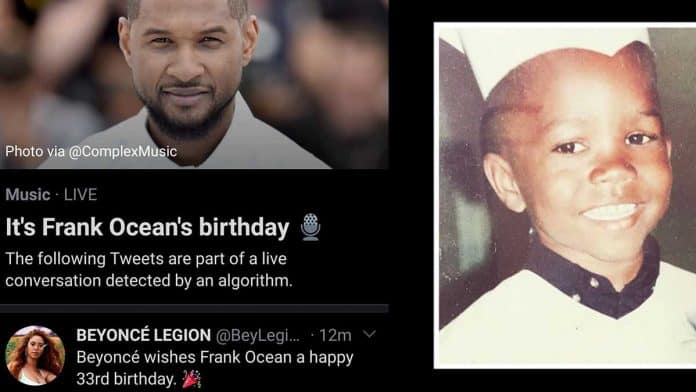 The year 2020 has wrecked a lot of lives. As for Frank Ocean, he lost his younger brother Ryan Breaux who died in a car crash a month before his 19th birthday.

Although the loss is irreplaceable, the love his fans showered him with on his 33rd birthday must’ve helped him ease the pain.

Frank Ocean turned 33 on October 28, 2020. His name started trending on Twitter as his fans gushed over him with wishes.

As pointed out by a fan, the Twitter algorithm mistook his face for Usher’s in the explore section that shows trending tweets in the chosen category.

However, due to the nature of this event, the trend was short-lived and faded away after a while. Usher reacted to this with a retweet and wrote, “Man! I get two birthdays… PRECIATE that Twitter.”

Ocean’s fans, who often regard him as the best artist of the decade, sent their love and best wishes to the artist and thanked him for his distinctive music and songwriting.

Also, Beyoncé posted on the front page of her official website an image of Frank Ocean wishing him a happy birthday.